The mesh analysis is also called the Loop Current Method, is quite similar to the Branch Current method in that it uses simultaneous equations, KVL  (Kirchhoff’s Voltage Law), and Ohm’s Law to determine unknown currents in a circuit. It disagrees from the Branch Current method in that it does not use KCL (Kirchhoff’s Current Law), and it is usually able to solve a circuit with less unknown variables and less synchronous equations, which is especially nice if you’re forced to solve without a calculator.

The selection of each current’s direction is entirely free just as in the Branch Current method, but the resulting equations are easier to solve if the currents are going the same direction through intersecting element (note how currents I1 and I2 are both going up through resistor R2, where they mesh or intersect). If the assumed direction of a mesh current is wrong, the answer for that current will have a negative value.

We now define a new term, loop current. (You can also call them to mesh currents.) Up to now when we’ve talked about current, it has usually been in the context of an element current (current flowing through an element). When we use the term loop current we are talking about a hypothetical current flowing around a loop. This is a bit of an odd idea but stick with me. In the following circuit, let us define loop currents i1 and i2 flowing around meshes 1 and 2 with the positive direction of the loop current indicated by the arrows.

Let’s take a close-up look at R3  in the middle branch of the circuit. What is the element current flowing through R3? 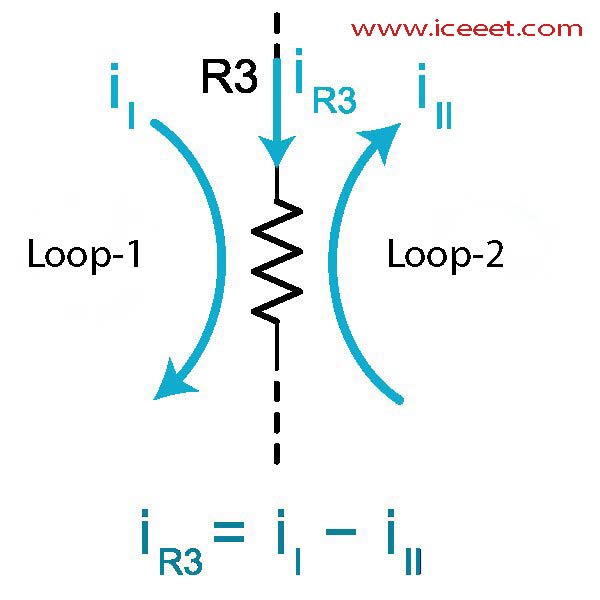 The way the loop currents are drawn, it looks like both of them are going through R3   but in opposite directions.

Step To Analysis The Mesh Current 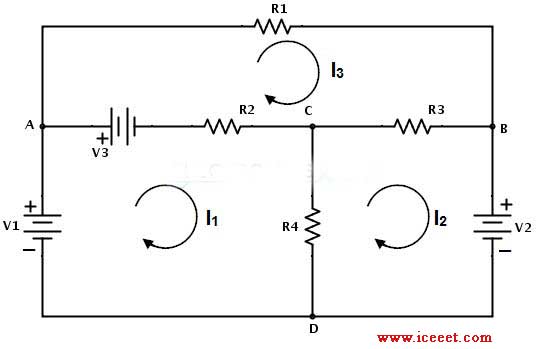 Secondly, we have to apply KVL for each mesh. By applying KVL around the first loop we get

Similarly, applying KVL around the second loop we get,

And by applying KVL around the third loop we get,

Therefore, by solving the above three equations we can obtain the mesh currents for each mesh in the given circuit.

Super mesh Analysis is a better technique instead of using Mesh analysis to analysis such a complex electric circuit, where two meshes have a current source as a common element. This is same where we use Supernode circuit analysis instead Nodal circuit analysis to simplify such a circuit where the assign supernode, completely enclosing the voltage source inside the supernode and reducing the number of none reference nodes by one for each voltage source.

A super mesh is formed when two adjacent meshes share a common current source and none of these (adjacent) meshes contains a current source in the outer loop.

In super mesh analysis technique, the current source is in the inner area of the super mesh. Therefore, we are able to reduce the number of meshes by one for each current source which is present in the circuit.

The single mesh can be neglected if the current source (in that mesh) lies on the perimeter of the circuit. Alternatively, KVL (Kirchhoff’s Voltage Law) is applied only to those meshes or super mesh in the renewed circuit.

Consider the below circuit in which super mesh is formed by the loop around the current source.

Applying KVL to the super mesh we get

Applying KVL to the Mesh 3 we get

Thus, by using these three mesh equations we can easily find the three unknown currents in the network.