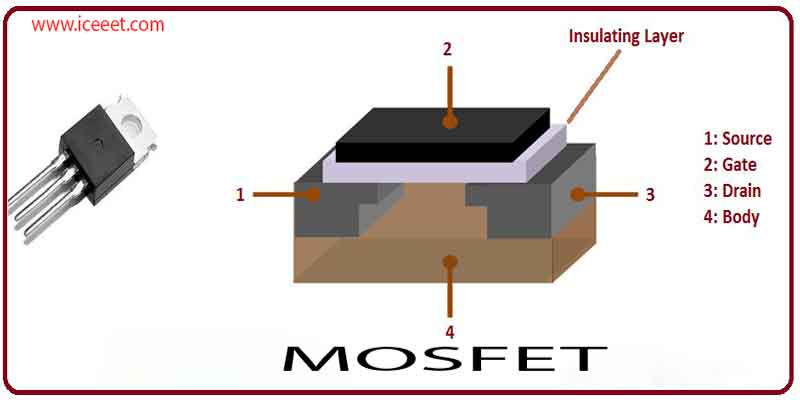 So let’s know a little about the device. The device is generally divided into two parts.

MOSFET is a metal oxide semiconductor field-effect transistor. It’s an electronic device that can control the flow of electrons itself. That’s why it’s called Active Device. It’s a semiconductor device which used for amplifying and switching electronic signals in electronic devices.  The MOSFET is the core of an integrated circuit and it can be designed and founded in a single chip because of these very small sizes.  It is a four-terminal device with terminals’ source, gate, drain, and body. The body of MOSFET is frequently connected to the source terminal so making it a three-terminal device like a field-effect transistor. The MOSFET is very far the most common transistor and can be used in analog and digital circuits. 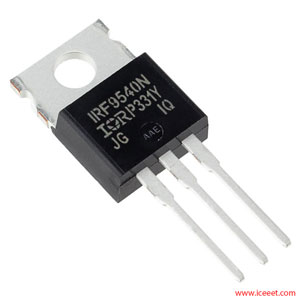 Construction of a MOSFET

The given figure shows the construction of a MOSFET. 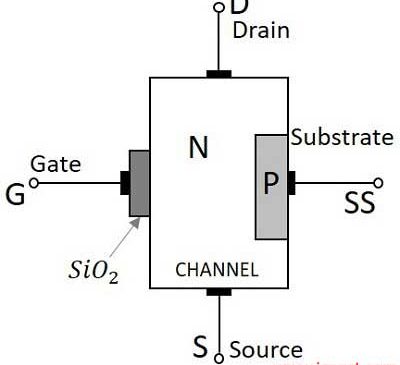 Depending on the type of materials used in the construction, and the type of operation, the MOSFETs are classified as in the following figure. 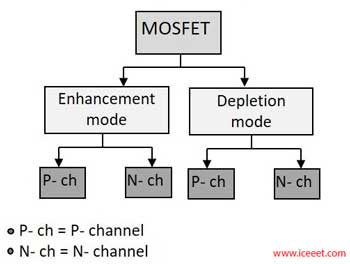 After the classification, let us go through the symbols of MOSFET. 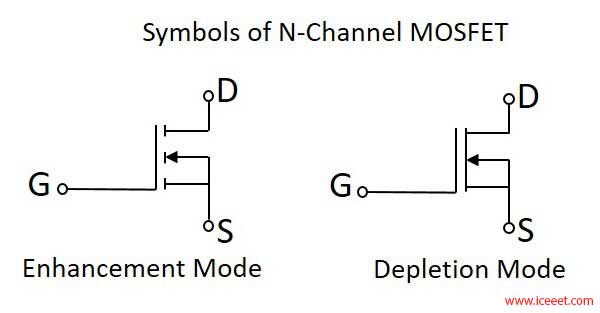 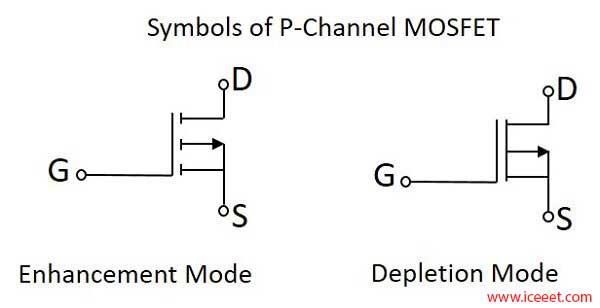 Now, let’s go through the constructional details of an N-channel MOSFET. Usually, an N-channel MOSFET is considered for an explanation as this one is mostly used. Also, there is no need to mention that the study of one type explains the other two.

Let’s consider an N-channel MOSFET to understand its working. A lightly doped P-type substrate is taken into which two highly doped N-type regions are diffused, which act as source and drain. Between these two N+ regions, there occurs diffusion to form  N-channel, connecting drain and source. 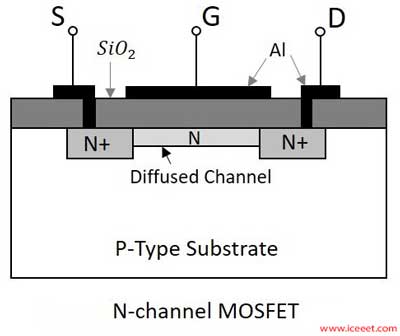 A thin layer of Silicon dioxide (SiO2) is grown over the whole surface and holes are made to draw ohmic contacts for drain and source terminals. A conducting layer of aluminum is laid over the whole channel, upon this SiO2 layer from source to drain which constitutes the gate. The SiO2 substrate is connected to the common or ground terminals. Because of its construction, the MOSFET has a very low chip area than BJT, which is 5% of the occupancy when compared to bipolar junction transistor. This device can be operated in modes. They are depletion and enhancement modes. Let us try to get into the details.

For now, we have the idea that there is no PN junction present between gate and channel in this, unlike a FET. We can observe that the extending channel N  between two N+ regions, the insulating dielectric SiO2 and the aluminum metal layer of the gate form a parallel plate capacitor. If the NMOS has to be worked in depletion mode, the gate terminal should be at negative potential while the drain is at a positive potential, as shown in the following figure. 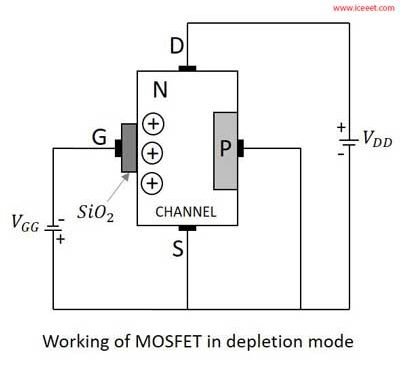 When no voltage applied between gate and source, some current flows due to the voltage between source and drain. Let some negative voltage is applied at VGG. Then the minority carriers i.e. holes, get attracted and settle near the SiO2 layer. But the majority carriers, i.e., electrons get repelled. With some amount of negative potential at VGG, a certain amount of drain current ID flows through the source to drain. When this negative potential is further increased, the electrons get depleted and the current ID reduce. Hence the more negative the applied VGG, the lower the value of drain current ID will be.

The channel nearer to drain gets more depleted than at sources like in FET and the current flow decreases due to this effect. Hence it is called as depletion-mode MOSFET.

The same MOSFET can be worked in enhancement mode if we change the polarities of the voltage VGG. So, let us consider the MOSFET with gate-source voltage VGG being positive as shown in the following figure. 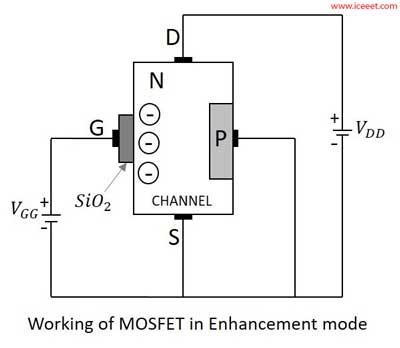 With some amount of positive potential at VGG, a certain amount of drain current ID flows through the source to drain. When this positive potential is further increased, the current ID increases due to the flow of electrons from source and these are pushed further due to the voltage applied at VGG. Hence more positive the applied VGG, the more the value of drain current ID will be. The current flow is enhanced due to the increase in electron flow better than in depletion mode. Hence this model is termed as Enhanced Mode MOSFET.

The construction and working of a PMOS are the same as NMOS. A lightly doped n-substrate is taken into which two highly doped P+ regions are diffused. These two P+ regions act as drain and source. A thin layer of SiO2 is grown over the surface. Holes are cut through this layer to make contacts with P+ regions, as shown in the following figure. 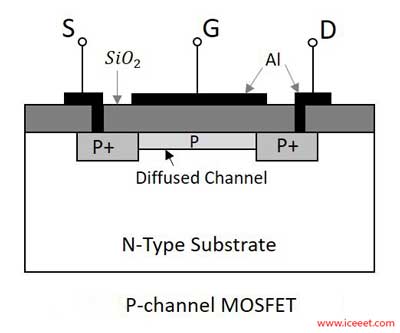 When in the gate terminal is given a negative potential at VGG than the drain-source voltage VDD, then due to the P+ regions present, the hole current is increased through the diffused channel P and the PMOS works in Enhancement Mode.

When the gate terminal is given a positive potential at VGG than the drain-source voltage VDD, then due to the repulsion, the depletion occurs due to which the flow of current reduces. Thus PMOS works in Depletion Mode. Though the construction differs, the working is similar in both types of MOSFETs. Hence the change in voltage polarity both of the types can be used in both the modes.

This can be better understood by having an idea of the drain characteristics curve.

The drain characteristics of a MOSFET are drawn between ID (drain current) and  VDS (drain-source voltage ). The characteristic curve is as shown below for various values of inputs. 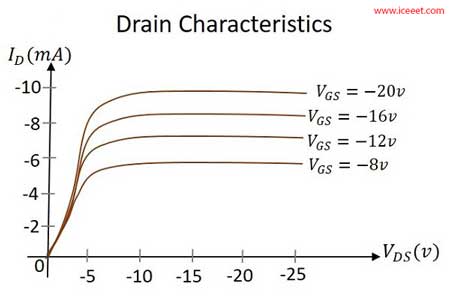 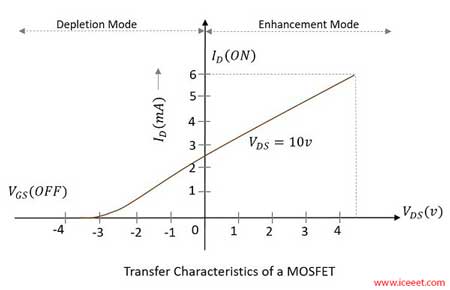 MOSFET as a Switch

In this circuit, using enhanced mode, an N-channel MOSFET is being used to switch the lamp for ON and OFF. The positive voltage applied at the gate of the MOSFET and the lamp is ON (VGS =+v) or at the zero voltage level the device turns off (VGS=0).    If the resistive load of the lamp was replaced by an inductive load and connected to the relay or diode to protect the load. In the above circuit, it is a very simple circuit for switching a resistive load such as LEDs or lamps. But when using MOSFET to switch either inductive or capacitive load protection is required to contain the MOSFET applications. If we aren’t giving the protection, then the MOSFET will be damaged. The MOSFET operates as an analog switching device, that needs to be switched between its cutoff region where VGS =0 and saturation region where VGS =+V. 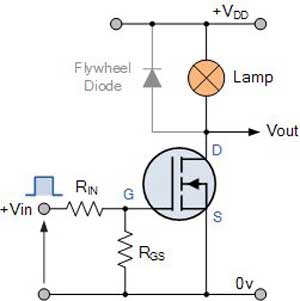 Nowadays most of the lights placed on the highways are done through High-Intensity Discharge lamps (HID), whose energy consumption is high. Its intensity cannot be controlled according to the requirement, so there is a need to switch on to an alternative method of the lighting system, i.e., to use LEDs. This system is built to overcome the present-day limitation of HID lamps. 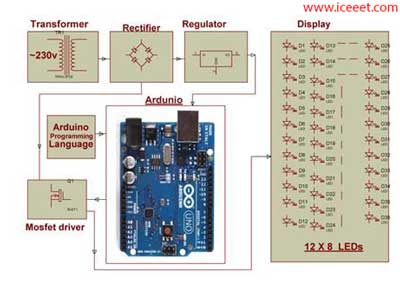 This project is designed to control the lights automatically on the highways using microprocessors by variants of the clock pulses. In this project, MOSFET plays a major role that is used to switch the lamps as per the requirement. The proposed system using an Arduino UNO that is a new development board consist of a processor to control it. We can replace the LEDs in place of HID which are connected to the processor with the help of the MOSFET. The microcontroller release the respective duty cycles then switches the MOSFET to illuminate the light with bright intensity.

In this system, mostly the lighting-up of highways is done through HID lamps (High-Intensity Discharge lamps ), whose consumption of energy is high and there is no specialized mechanism to switch the Highway light on in the evening and switch off in the morning. 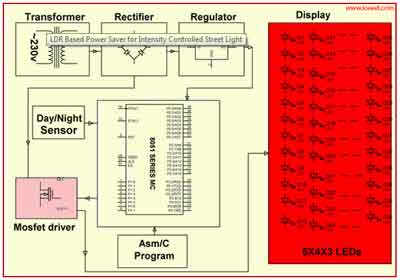 Its intensity cannot be controlled according to the requirement, so there is a need to switch to an alternative method of the lighting system, i.e., by using LEDs. This system is built to overcome the present day, limitation of HID lamps. This system demonstrates the usage of  LEDs (light-emitting diodes) as a light source and its variable intensity control, according to the requirement. LED consumes low power and its life is more, as compared to conventional HID lamps. The most important and interesting feature is its intensity that can be controlled according to requirements during non-peak hours, which is not feasible in HID lamps. A  LDR (Light Dependent Resistance) is used to sense the light. Its resistance reduces drastically according to the daylight, which forms an input signal to the controller.
A bunch of LEDs is used to form a street light. The microcontroller contains programmable instructions that control the intensity of lights based on the PWM (Pulse width modulation) signals generated.

During peak hours the intensity of light is kept high, and as the traffic on the roads tends to decrease in late nights; the intensity also decreases progressively till morning. Finally, the lights get completely shut down at morning 6 am and resume again at 6 pm in the evening. The process thus repeats.

The Space Vector PWM is a sophisticated technic for controlling AC motors by generating a fundamental sine wave that provides a pure voltage to the motor with lower total harmonic distortion. This method overcomes the old technic SPWM to control an AC motor that has high-harmonic distortion due to the asymmetrical nature of the PWM switching characteristics. 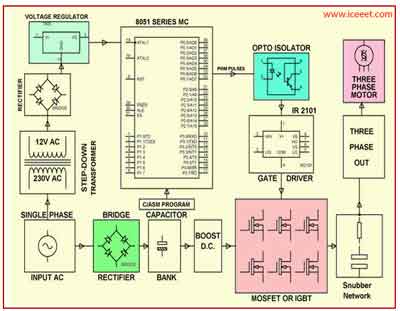 In the system,  DC supply is produced from the single-phase AC after rectification and then is fed to the 3-phase inverter with 6 numbers of MOSFETs. For each phase, a pair of MOSFET is used, and, therefore,  three pairs of MOSFETs are switched at certain intervals of time for producing a three-phase supply to control the speed of the motor. This circuit also gives a light indication of any fault that occurs in the control circuit

SO this is all about MOSFET applications, Finally, we will conclude that the MOSFET requires high voltage whereas transistor requires low voltage and current. As compared to a BJT, the driving requirement for the MOSFET is more better.

Article Name
Mosfet | Types Of Mosfet | Application
Description
MOSFET is a metal oxide semiconductor field-effect transistor. It's an electronic device that can control the flow of electrons itself. That's why it's called
Author
Dibbo
Publisher Name
iceeet
Publisher Logo