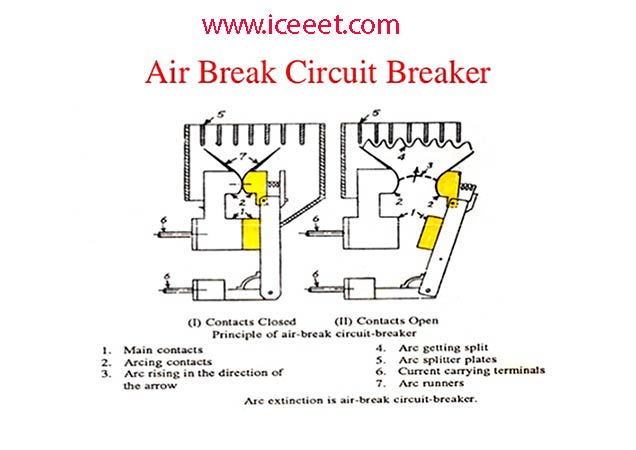 In this air break circuit breaker the arc is initiated and extinguish in substantially static air in which the arc moves. Such breakers are used for low voltages, usually up to 15KV and rupturing capacities of 500MVA. Air circuit breaker has different advantages over the oil, as an arc quenching medium. These are

The arc resistance is increased to such an extent that the voltage drop across the arc becomes more than the system voltage, and the arc gets extinguished at the current zero of AC wave.

types of air break circuit breaker are given below.

This is the simplest type of Air Break Circuit Breaker where contacts are made in the shape of two horns. The arc initially strikes across the shortest distance between the horns, but it is then driven steadily upwards by the 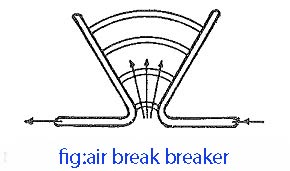 convection currents set up due to heating of air by arcing and the interaction of magnetic and electric fields. The arc extends from one tip to the other when the horns are fully separated resulting in arc lengthening and cooling. The relative slowness of the process and the possibility of the arc spreading to adjacent metalwork limits the application to about 500 V and to low power circuits. The figure shows such a breaker.

Here the blow-outs consist of steel inserts in the arcing chutes. These are so arranged that the magnetic field induced in them by the current in the arc moves it upwards still faster. The steel plates divide the arc into a number of short arcs in series. The distribution of voltage along the length of an arc. is not linear but is accompanied by a rather large anode and cathode drops. If the total sum of anode and cathode drops of all short arcs in series is more than the voltage of the circuit to be interrupted, conditions for quick extinction of the arc are automatically established.

When the arc comes into contact with the relatively cool surfaces of the steel plates, it gets rapidly and effectively cooled. The movement of the arc may be natural or assisted by a magnetic blow-out, the latter is used for heavy duties up to 500 MVA at 16 KV. This type of breaker becomes bulkier, the arc chutes more complex and the initial cost higher as the voltage and MVA increase. Further, the time of operation is not small enough to make this breaker suitable for modern power systems. 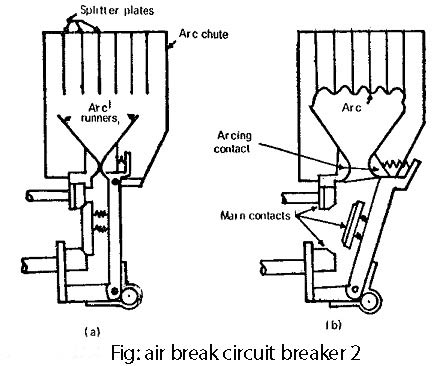 In a number of Air Break Circuit Breaker used in circuits up to 11 KV the extinction of the arc is carried out by means of a magnetic blast. . To achieve this the arc is subjected to the action of magnetic field set up by coils connected in series with the circuit being interrupted. Such coils are called blow out coils because they help in the arc being magnetically blown out. Figure 3: shows the principal scheme of a magnetic-blast circuit breaker. The arc is blown magnetically into arc chutes where the arc is lengthened, cooled and extinguished. The arc shields prevent spreading of the arc to adjacent metalwork. As the breaking action becomes more effective with heavy currents, this principle has resulted in increasing the breaking capacities of these breakers to higher values. 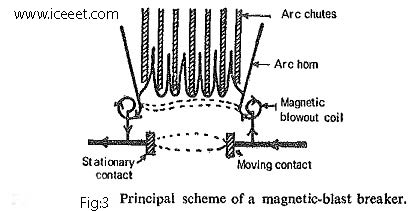 Arc chute is an efficient device for quenching an arc in air, which performs three interrelated functions:

Air Break Circuit Breaker are, therefore, generally suitable for the control of power station auxiliaries and industrial plants. When they are chosen for such service, it is generally on the ground that they combine a high degree of safety with minimum maintenance. They also do not require any associated equipment such as compressors, etc. As they have no oil, they are recommended wherever fire or explosion hazards are to be feared.