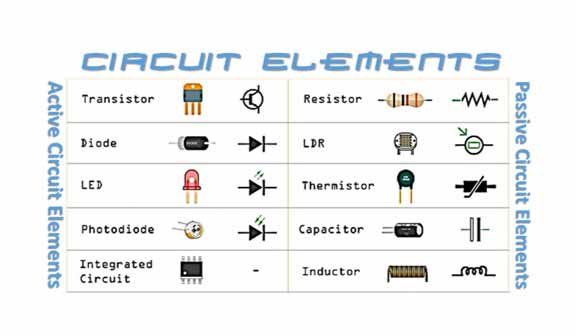 It is not possible to construct a circuit without element or component. The first essential element in the formation of any circuit is the circuit element. Circuit Elements are also called Circuit Elements or Circuit Components. In the previous discussion, we discussed the electrical circuit and its types. Today we will discuss the elements of the circuit or the Circuit Elements.

What’s going on in today’s discussion:

What is the Circuit Elements?

Circuit Components that can supply energy to a circuit or receive or absorb energy from a circuit are called Circuit Elements. Different electronic symbols are used to reproduce the components. Below is shown a basic circuit with two Circuit Elements:

Depending on the supply and absorption of energy in the circuit, all the Elements of the circuit can be divided into two main parts:

Some examples of Active Circuit Elements:

We know that a voltage source is a source whose load changes even though it provides a certain amount of voltage (eg battery).

Transistors essentially increase the energy of a signal. Also, its amplification is able to control the charge flow in the circuit. So a transistor is also included in Active Circuit Elements.

Some notable examples of Passive Circuit Elements are:

The resistor or resistor is a Passive Elements because it cannot deliver any type of energy to the circuit. However, they only receive energy from the circuit and disperse it as heat through the flow of electricity. So we can call the register or resistor the Passive Circuit Element.

The capacitor is considered as a Passive Circuit Elements because it can store energy as an electric field. Since the capacitor does not supply or increase power, it is considered a Passive Circuit Element. Many think capacitors save energy and then supply it to the circuit. But it doesn’t actually supply energy, it basically saves energy for a little while for later use. Besides, this capacity is very limited and transient.

The transformer is used almost to raise the voltage level. However amazing, the truth is, the power is kept constant. Transformer’s step-up voltage, power, energy, etc. When the primary and secondary side is the same, the transformer cannot supply or supply any energy. This is mainly because the transformer is also included in the Passive Circuit Elements.