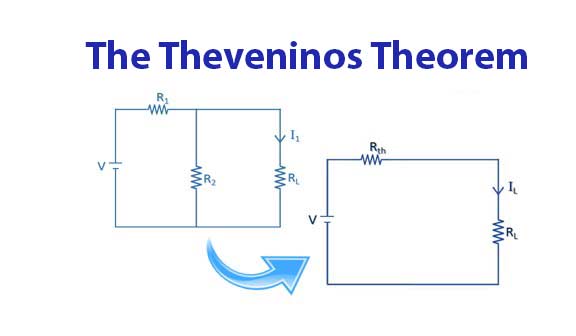 Thevenin Theorem is a popular method of solving complex circuits. 1883 The French telegraph engineer Leon Charles Thevenin Discover this theory. But 1926 The German scientist, Hermann von Helmholtz, was known at the time 1853 Discovered this same theory in the But then the Theorem has gained huge popularity as Thevenin Theorem.

Today we will talk about the Thevenin Theorem in detail. What is going on in our discussion today:

Thevenin states in his Theorem that no matter what component is within a network circuit (Figure 1) if it is a two-terminal network and a linear bi-lateral circuit, it can be expressed by a voltage source and series resistance (Figure 2).

Any two-terminal linear networks or circuits can be released in the form of an Equivalent Network / Circuit, which will be in series with a register voltage source. This is originally called Thevenin’s vs. Circuit. A linear circuit can have an independent source, dependent source, and register.

So we can solve this circuit easily by using the Thevenin Theorem, transforming that circuit into a simple series circuit. Since the circuit is in series there is no difficulty in changing the load resistance or any element.

Steps to apply the Thevenin Theorem

To solve a circuit with Thevenin Theorem, we have to follow some steps or Steps. The following is explained with:

Step 2: Identify the loop in the circuit, the voltage source of the loop curves (KVL)  The voltage from which the resistance is opened is applied (Vth) Have to figure out.

Steps 4: The Last of Us Vth, Rth ও RL It will have to calculate a Thevenin Equivalent Circuit and load current from this circuit (IL)  It has to be evaluated. (Circuit 5)

Question: From the following circuit, determine how much current I will flow through the R resistance of the circuit using the Thevenin theorem?

Since we have to calculate the current flowing through R resistance, we have to open this load and separate it.

The voltage from the circuit this time (Vth) Has to figure out.

Since the edge on the right side is open 4 Ω No current will flow in the resistance. So I = 0 Will be

This time we KVL apply By doing VthWe have to find the value,

This time the voltage source of the circuit is shortened by the open edge (Rth) To be diagnosed (circuit 1.5).

So R The amount of current flowing through the resistance,