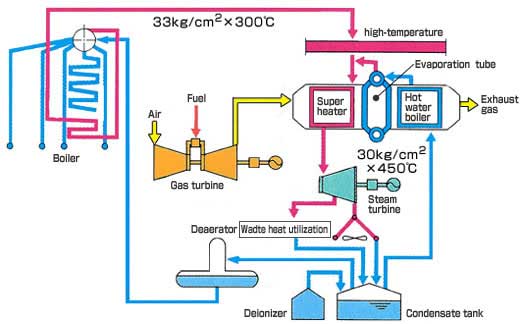 Any power plant is made up of numerous equipment or equipment. We will now discuss the various Steam Power Plant equipment.

This is a very important part of the steam power plant. This section is composed of the following equipment. For example:

The following equipment of steam power plant is described below:

The boiler is called a steam generator or steam generator. The function of the boiler at the steam power station is to convert water into steam in the heat of fuel. At this steam push, the steam turbine rotation speeds up and generates electrical power from the electric generator, driving the electric generator connected to the shaft of the turbine. Depending on the production capacity and the number of units of a steam power plant, one or more boilers are installed.

The boiler can be divided into two main types due to the difference of water or fire heat flow between the boiler tubes. Namely:

Fire-tube boilers:  A fire tube is called a fire tube boiler, which burns through a boiler’s tube or tube and turns water vapor through its exterior.

Fire tube boilers are drums or tubes. The inner tubes of this boiler are usually attached horizontally, vertically, inclined and so on.

In this type of boiler, the thermal field is less because of the flame flow through the drum or tube. Typically, a fire tube boiler can produce up to 4 pounds (5 kg) of steam per hour.

A water tube is called a boiler, the water through which the water flows through the boiler tube into the steam and the heat flowing through its exterior.

Water-tube boilers can be of straight and bent tube shape, landscape, with one or more drum specifications, perpendicular drum, horizontal, steep and inclined tubes. 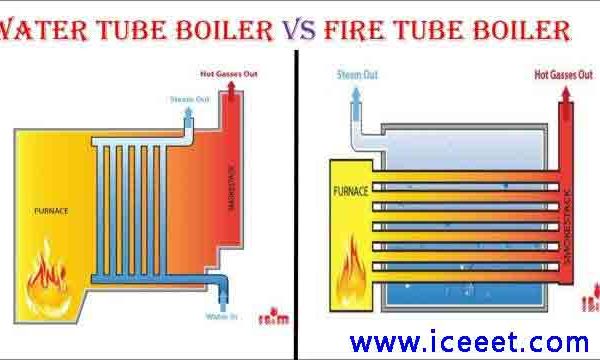 The walls of the Boiler Furnace are constructed by fire clay, silica, clay, etc. Because these elements can withstand the change of shape, weight or structural properties at high temperatures. These components are called Refractory Materials.

There are three types of boiler reactor walls. Namely:

But in such reactors that produce very high temperatures, refractory materials will be damaged if you use such walls. In such cases, Hollow Refractory Walls are used where the air cooling system is added which keeps the wall temperature of the reactor normal.

But Water Walls are the most used in boiler reactors in recent times. Water walls are formed by combining several empty straight tubes. The tubes are connected to the top and bottom headers of the boiler. Water is circulated in the boiler through each tube on this wall. Water Walls absorb the radioactive heat of the reactor, which protects the walls of the reactor from overheating.

The steam produced initially in the boiler drum is low in temperature and contains some aqueous particles which are very harmful to the steam turbine. So the steam has to be re-heated to raise the temperature to full steam. And the heater or device used to turn it into full steam is called a superheater.

The superheater is mainly divided into two parts. Namely:

But it has two major disadvantages. First, it can become overheated due to the high temperatures in the reactor. Secondly, the temperature of the superheater decreases with the increase of the steam output.

In some cases, both heaters are used together. The convection superheater is then connected to the top of the radiant superheater, and both receive heat from the furnace and the flue gas, respectively.

The steam generated by the boiler is heated using a superheater and the device that re-heats the steam before entering the steam turbine is called a reheater.

Position the reheater at the top of the superheater or immediately after. Its construction and shape is very similar to that of a superheater. That is, it is also a pipe or tube-shaped heat exchanger.

The following figure shows the position of the superheater and reheater: 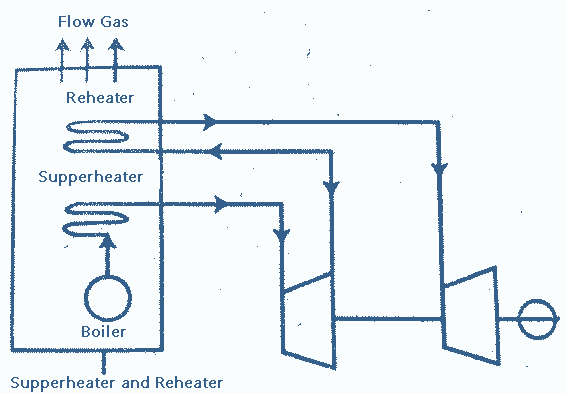 The work of the reheater as part of the boiler is of no importance. It has been observed that the vapor generated in some boilers is passed through a superheater even though some of the vapor remains in the water. And because of these aquatic particles, the blades of a steam turbine have the potential to rust.

It is a type of device that receives heat from the flue gas and sends the feed water to the boiler drum, initially heating it a bit. This is because, by providing heated water rather than cold water in the boiler drum, the boiler’s efficiency increases somewhat.

Its one-way feed is connected to the exhaust pipe of the water pump and to the unconfined boiler drum. The heat of the flue gas begins to flow through the feed water and out through the pipe of the economizer.

An air preheater is a device that is supplied by heating the air before sending it to the furnace or furnace. This increases the efficiency of the boiler.

Air preheater has several advantages such as:

The steam power plant uses a tapered air pre-heater to provide heated air to the reactor, and its internal pipes are connected to the side by side plates. The air preheater is positioned between the chimney and the incinerator. The cold air inside it comes into contact with the hot wash and heats it into the furnace.

Depending on the method of transferring heat to the air of the flue gases, the air preheater can be divided into 2 parts. Namely:

This pre-heater is again divided into (a) tubular type and (b) plate type heater.

In a cylindrical heater, 1.5 to 1.52 cm. Mr. The net is made of steel with the diameter and the outer part is sometimes attached to an iron sheet, which is made of 3 to 5 kg metal sheet. The air preheater is placed in or near the chimney.

A sheet heater or heater is connected to one another by means of several sheets and metal connections. There are a number of holes on the leaf, and the diameter of these pellets is usually 1.5 to 2 cm. Mr. Up to Its air flows through the hole and flue gas flows outward.

A regenerative air preheater is also called a rotating heater. The air flows through one side of the tube and the flue gas flows through the other side tube, and the heater also rotates. These tubes are prepared by a sheet made of corporate tin, and there is a way for the heat of the fu-gas to enter the air, thus cooling the air and heating it slowly. This heated air from the air preheater is sent to the boiler reactor with the help of a boiler draft fan.

The device that condenses the steam from the turbine into a condenser, which is converted into water and re-fed into the boiler as feedwater. This is also called a type of Heat Exchanger. 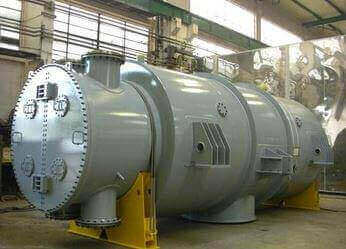 The condenser is mainly of two types. Namely:

In a jet condenser, cool water and exhaust steam are mixed together. This causes the cooling water and condensate temperature to remain the same when leaving the condenser.

The advantages of this type of condenser are:

However, it has two benefits. For example:

Surface condenser does not directly mix cold water and exhaust steam. The advantages of this type of condenser are:

It also has some disadvantages. For example: 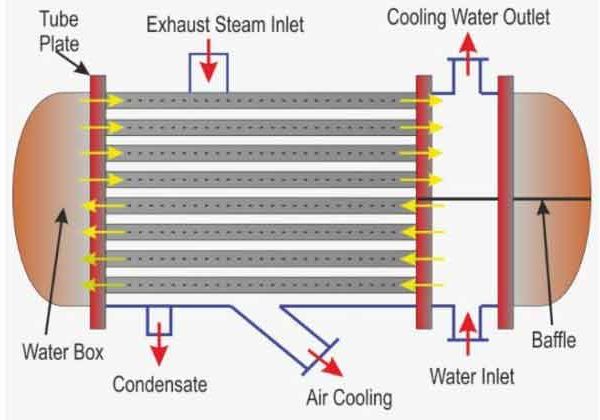 As the surface condenser, the exhaust steam converts to the boiler drum as feedwater by turning it into warm water in contact with cold water, which reduces the fuel consumption of the boiler by about 20%. Therefore, at the present time, this condenser is popularly used.

Steam turbines are used as prime movers at the steam power plant.

A steam turbine is a device that drives mechanical steam driven by the steam pressure generated in the boiler and generates electrical power by turning the generator connected to it.

Here are some reasons why using a steam turbine in a steam power plant: 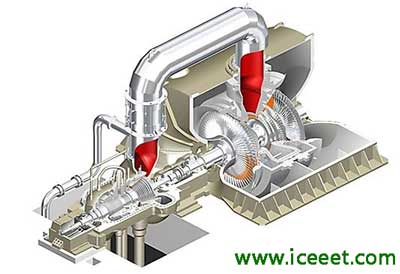 The steam turbine can be divided into two, depending on its structure and methodology. Namely:

The turbine that works in the Impulsive Force of steam or indirect push is called the Impulse Turbines.

The turbine has many blades around the wheels and the blades are adjacent to the blades. In these tubes, the steam causes high pressure, causing the blades to rotate, the wheels rotate as the blades rotate, and the shaft attached to the wheels rotate at the same speed. And with this shaft the generator armature is connected, from which the power is generated. The impulse turbine is converted to mechanical force by the use of steam pressure.

Impulse turbines are used where steam is low and high velocity is produced through narrow channels.

The turbine that is powered by the Reactive Force of vapor is called Reaction turbines.

It is essentially a multi-stage turbine. This turbine is composed of a number of fixed and moving reaction blades. All of its fixed blades are positioned in equal numbers on the inside of the casing and fitted with the rater on the moving blades. 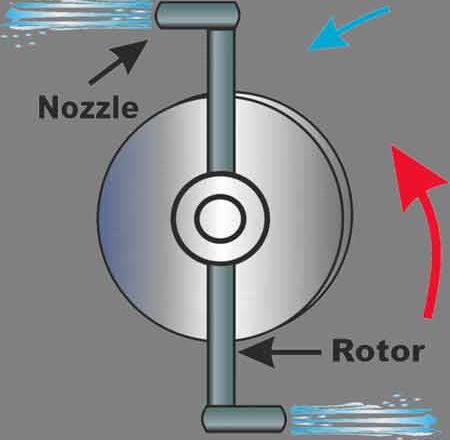 Reaction turbines are used where the volume of steam is high and the steam is required to flow steam through the lower blades.

The water source of a boiler feed is usually a river or heart. From here the water is first stored in the storage tanks. But water may contain various gases, garbage, which are harmful to storage tanks and boilers. Therefore, it is very important to purify the water before sending water to the boiler.

Water purifiers are primarily used to separate garbage, clay, and gas from water. After that, the harmful material is separated and the water is purified by boiling through various mechanical, thermal and chemical processes.

A modern steam power plant has numerous electrical equipment. However, the most important tools are:

There are several types of transformers in a power plant. For example:

(A) Maine step-up transformer: Used to step-up the generation voltage for power transmission.

(B) Station Transformer: Used for general service of power plants, such as lighting.

It has some tools that detect system errors and keep the faulty part separate from the Healthy Section. It also includes circuit breakers, relays, switches and other controlling devices.